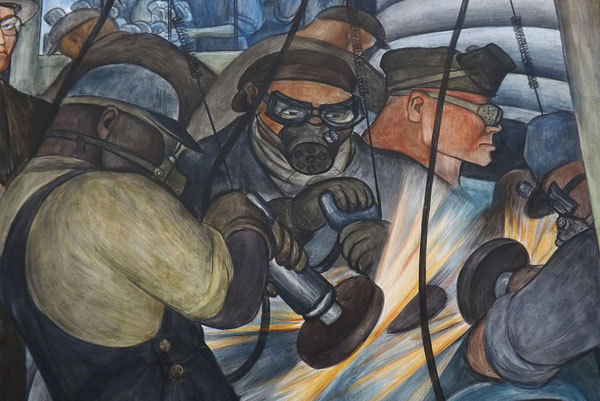 In 1933, the US population was 126M. Automobiles were just entering ubiquity, and it hadn't been that long (outside of urban areas), that telephones and electricity had reached ubiquity. Today's US population is 319M. Since we were at 126M, the US Federal SOC system has seen 7 major updates. Seven. One update, for every US Census cycle. That's a blunt reality check. There have been more iPhone handset updates, since its release in 2007.

The rate at which new industry sectors are forming and new job classifications for thousands of workers each year are forming, is damn exciting for our economy. It's barely being documented though, and even ADP classifies job sectors as either "Farm" or "Non-Farm" in its reports.

When reading Facebook's diversity numbers published in their June 25th blog post—one of the many, recent, victorious posts from companies, independently releasing their EEO data to the public (!!)—the absence of universal job classifications within just Tech, to make comparative sense of what all these numbers meant between the different organizations across our professional community as a whole, really became clear to me for the first time.

In their release, Facebook declares their percentage of white Tech employees to be 85%. Well, that's great—I do know what makes a human white, or for instance, male. Gender and race are common mental models among all humans worldwide. What qualifies a job type at Facebook as Tech, versus Non-Tech? I'm a UX designer by trade... so, would I be bucketed into Tech, or—heaven forbid—Marketing? Is Marketing even considered Tech (much as I doubt so, they well could be).

Job types and categories are cultured definitions, not human mental models. So unlike race and gender they are either subjective or objectively defined. When classification standards exist for data management, objectivity exists and comparison for reporting and accountability is easy-peezy. That's not the case today, though—so Twitter, Facebook, LinkedIn, Google, EBay, Yahoo!, Twitter, and Pinterest, each qualifying "x-percentage" of their workforce as Tech and "y-percentage" as Non-Tech, means what? If you're an engineer, a developer, in accounting, or in customer support, where you fit in that binary is obvious. If you're in UX, or product marketing, or research? Or the generic "analyst," not so much.

Why is this additional layer of sector-specific data classification necessary? Well, because as an employee or jobseeker, when I work within a sector and look at my standing among my peers, most of the data-points floating around in my head are defined by terms and occupation types unique to each sector—and because of the fluid nature of language, these types & terms are likely never to make it into the SOC taxonomy, as the Feds don't update it between Census survey years.

30 years ago, Tech was mostly semiconductor companies. Today, it's everything from Social Media consultancies, to boutique App firms, to Google to Apple. From the Apple 1 (1976) through the iPhone 6 (last week), there have now been... 3 updates total, to the EEOC SOC "Crosswalk". Three. It's almost comical that as an extended version of the basic SOC list, it's called a "Crosswalk". As if to make it more jargon-y pedantic sounding. But, that's what it is, and specifically the SOC Crosswalk is what's used in the sole form of universal workplace diversity reporting.

The standard EEO-1 Reports that the aforementioned flood of recent, wonderful disclosures of diversity data have been tied to, unfortunately offer little insight into what may possibly be a Tech versus a Non-Tech job. There is a clear tier for First/Middle Management and Executives. Then there are Technicians, Sales Workers, Administrative Support, Craft Workers, Operatives, Labor & Helpers, and Service Workers.

Kind of like Muzak is unilaterally considered the lowest-common-denominator "filler" music that everyone agrees we dislike, these categories seem to be Muzak's equivalent in job classification. Which is sad. But not something most Americans really question with the cynical, complacent impressions of Federal agencies tending more often than not to be stagnant and irrelevant.

In 1997 though, the US Department of Commerce did appear to take a jab at fixing this, by creating the NAICS—North American Classification System. For $62 you can purchase their 2012 hardcover edition. For $79 you can also buy a CD-ROM of their 2012 edition, that comes with its own "search-and-retrieval" software. Literally, this seems to be almost exactly what my dad founded a startup to do with agricultural data, but in 1987. On another page at their website, a database subscription is alluded to. So: now we have today's diversity reporting done by the US Equal Employment Opportunity Commission, running mandated (for businesses with over 100 employes) survey, that classifies data according to the US Department of Labor's Bureau of Labor Statistics' SOC Crosswalk—but then the US Department of Commerce opted 17 years ago to overhaul the SOC with their own system, but unlike the SOC system its purpose and uses are totally opaque... #facepalm

Now being the optimist with a flame on my ass and a charge to drive change that's dependent on culturally relevant categorization of occupation taxonomies for data structuring that can lead to sensible/human reporting... my complacence has quickly faded, seeing how badly this otherwise amusing stagnance is costing the value of the data we're collecting. Data that subsequently has no real meaning. More plainly put: dang this got messy, time to bring the private sector in to do the work that businesses and the general public clearly needs done!

An exciting opportunity with EqualTogether that I look forward to diving into more deeply as our product matures, is picking-up where the Feds have all but left-off, and uniformly defining categories such as Tech and Non-Tech, Product Manager vs Product Marketing Manager, or Retail vs Brand, in our industry sector—Tech.

All of the above categories can easily be shoehorned into existing jobs on the SOC list, and HR managers have been doing just that to meet EEOC Reporting Requirements. Because they have to. For the general public to hold businesses accountable though, data classifications need to have meaning. So the shoehorning—which at best is inconsistent—won't do.

As a 3rd party with a vested interest in helping companies communicate more clearly and simply with employee prospects and customers, EqualTogether is looking forward to working with our earliest customers to develop a transport-protocol system of sorts, to match common-language names of job types and categories within Tech, to the pedantic Census SOC names & categories our HRIC and HCM systems have been cultivating spider-webs around.

HR departments still unfortunately, need to work with this pedantry in meeting EEO-1 reporting requirements—so we can't throw the baby out with the bathwater. Ugly as that baby might be. And we get that. And our management of recruitment data, will dovetail smoothly in with existing HRIC/HCM systems that employers depend on for EEO-1 and OFCCP reporting.

Wait—I haven't yet touched on the fascinating world of OFCCP reporting, have I? Another post, another excellent opportunity for toilet-time reading. Yep, making sense of all of this, empowering fast-paced employers to keep up with the pedantic craziness, all while making it easy to provide transparent insight into diversity and workplace culture shaping efforts: we're on it!