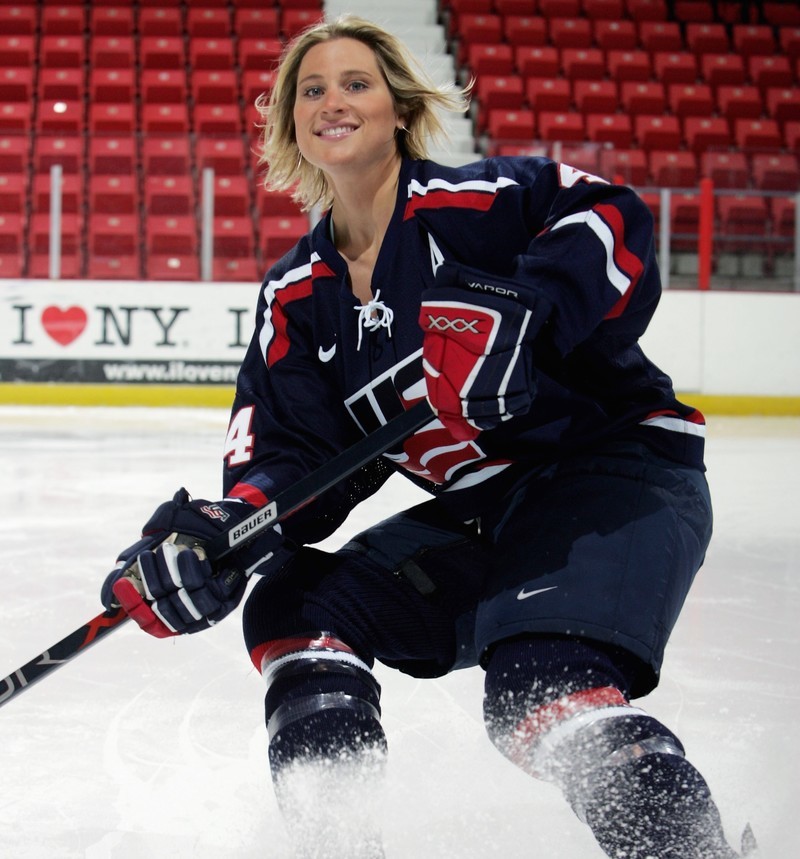 I grew-up listening to Ernie Harwell's inimitable voice on the radio as the chutzpah-soundtrack for every Detroit Tiger's game, win or lose. For EqualTogether's auf wiedersehen webpage though, I'd initially picked a quote from Angela Ruggiero (pictured above). The symbolism of her as the source of my parting sentiment meant much more to me than quoting Mr. Harwell—but Harwell's sentiment best captured how I felt.

I began EqualTogether from a fire in my belly to create tangible change-making solutions, after a lifetime of pattern-matching my own (usually dumbfounding) otherness when participating in activities my most natural instincts brought me into (such as ice hockey!). As Kimberly Bryant eloquently explained on-stage at a panel on Diversity in Design back in November: whether or not she had seen people in her own likeness working-in or studying software engineering, she would have still followed-through on that passion of hers as a career path... but dang, it woulda been nice along the way to have seen more Black folks and women.

Otherness doesn't deter those of us truly passionate about a practice-domain, from pursuing those passions with sincere excitement & commitment on a day to day basis—but it absolutely does make our time on the floor in the factories that much more exhausting. Exhausting in a way that eats at every passion within us, like a slow progressive itch that eventually mutates into a near complete emotional shutdown. That matters.

In a time when it was first being widely published that women and PoC were/are leaving Tech mid-career at a higher rate than ever before, my own subsequent itch snowballing into a tub of boiling tar in my gut mattered that much more to me—because it was clearly not just me, this friend, or that colleague. At age 40, and being of the strong conviction that we each need to actively contribute to dialog or work towards solving for the challenges most persistently nagging at us, I took a deep breath and chose to take a career pause to redirect this itch toward solving for this most stubborn of cultural problems. I'd also frame that choice as one resulting from an intensely encouraging-push into the founder-zone by an investor friend, and for the record would also just like to note that without his assurance of modest financial support and generous everything-support with garnering more funding, I would have never felt "safe" enough making that leap.

~18mos later I could not be prouder of what I learned, accomplished, failed-at, built, broke, and in-total created, with my time creating, mutating, pitching, selling, and shaping EqualTogether. Design tasks took a very necessary back-seat as a priority in my work (for literally the first time, ever!), and that alone was a shape-shifting experience. The mentors I worked with from across a handful of Tech companies, investment firms, diversity & policy consultancies, and the accelerator that sponsored me, I built relationships with that I will forever value—and those folks each pushed my learning on business, sales, survival, and building meaningful products, so far. The other founders with similarly-purposed startups, also bootstrapping to build businesses to alleviate Tech's diversity woes, were far greater in numbers than I'd anticipated—and my goodness, a more dedicated motley crew of a support community of founders rooting for other "competing" founders, I don't think I will ever again see.

Product strategy + design will always remain what I am the most obsessively fixated on shaping in my day-to-day, but doing EqualTogether blew open my entrepreneurial spirit for building business systems as nothing else would. For that, and for the people who helped me with professional, monetary, and mentorship support, I will always be grateful. Also: the "founders community" can at times, sure, be a social cesspit of privilege and machismo... but overall, wow. I have not left more gatherings with a more sore face from smiling, the everpresent hoarse voice from hours of spirited/excited dialog & introductions, and... yeah. Spending all the time selling myself to VCs did leave me feeling a bit "spent" viscerally, but the energized zeal of possibility that radiates from a room full of founders, is intoxicating. It is my favorite drug, yet—and one I hope to continue dabbling in.

Anyhow, so in 2016 I'm truly moving on—but wanted to write this to thank those who helped or inspired me along the way, those who remain committed to shaping cultural transformation in all realms (cuz it's HARD!), and—yeah. Proud to be that change I want to see in the world. And yes, as of this writing I am also available for hire. ninavizz at gmail dot com.